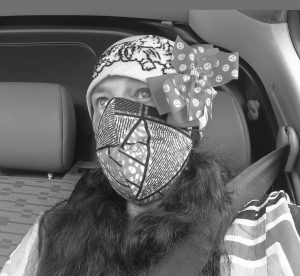 Delaine Le Bas was born in Worthing U.K 1965. She studied at St Martins School Of Art London. Delaine is a cross disciplinary artist creating installations, performance, photography and film. Her works focus on issues of identity, race, gender, sexuality and the continued violence and exclusions against whoever is perceived as “the other” within society. She was one of the sixteen artists who were part of Paradise Lost The First Roma Pavilion Venice Biennale 2007. She worked with her late husband the artist Damian Le Bas on their installations Safe European Home? (2011-2017) in 2017 producing the stage artworks and costumes together for Roma Armee. Delaine created Romani Embassy in 2015. Delaine has created performance and text works with her son the writer Damian James Le Bas. Her works have been included in Prague Biennale 2005 & 2007, Venice Biennale 2007, 2017 & 2019, Gwangju Biennale 2012, The Third Edition Of The Project Biennial Of Contemporary Art D0 Ark Underground Bosnia & Herzegovina 2015, Off Biennale Budapest 2015, Goteborg International Biennale For Contemporary Art Extended 2015, Critical Contemplations Tate Modern 2017, ANTI – Athens Biennale 2018. Delaine was one of the artists for FUTUROMA Collateral Event for Venice Biennale 2019. Recent projects include costumes for Rewitching Europe which premiered at Gorki in Berlin 1st November 2019 and a new installation and performance Witch Hunt III commissioned by Gorki for 4.Berliner Herbstsalon DEHIEMAITZE IT! which opened in October 2019. Delaine is one of the artists for Berlin Biennale 2020.

Delaine is represented by www.yamamotokeiko.com who are based in London.